Chart a Course for Mediterranean Ports

You’ve been a Star Trek fan for years – or perhaps just a short time.

You’ve done the conventions. You’ve attended the actors’ talks and heard their stories about life on- and off-set of the various Trek series and films. You’ve collected the autographs. Maybe you’ve even had a chance to speak to the actors and shake hands.

In addition to the Q & A sessions, dealers’ room, and other activities available only to those booking the Trek cruise, these “floating conventions” give fans a chance for a little more personal interaction with the actors and behind-the-scenes folk such as make-up artists and special effects wizards. The actors who attend are happy to meet the fans and hang out with them.

I’ve been on a dozen Trek cruises, beginning in 1989. The Bahamas. Jamaica. Tahiti. Alaska. Bermuda. Down the coast of California, Mexico, Central America, and through the Panama Canal. Around the Mediterranean Sea.

On Oct. 19, 2010, Cruise Trek – a major organizer of Trek-themed cruises – will sail from Genoa, Italy, for a 9-night voyage around the western half of the Mediterranean, calling in at ports in Spain, Morocco, and Portugal.

More information about the Mediterranean cruise, plus booking and registration forms, can be found on the Cruise Trek website. Articles on past Cruise Trek cruises will give an idea what Cruise Trek is all about. 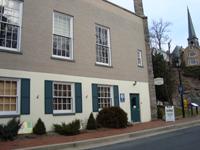 “You’ll probably hear about it on your tour tonight,” my server at the Ellicott Mills Brewing Co. told me. “We’re the last stop on the tour.” Have you seen it?, I asked him. No, he said, but some of the other wait staff had –

the spectral image of a man hanging from the ceiling in a corner of the second floor.

The Ellicott Mills Brewing Co, a restaurant on Main Street in the old town of Ellicott City, was once a lumber store, and the unfortunate man was the shop’s accountant. During the Depression of the 1930s, he was laid off, as so many were at that time, just before a three-day holiday weekend. On the Tuesday morning, when the staff came in, they found him. He had apparently slipped into the store on Friday, hid until closing, then hung himself from the rafters of the second floor.

It was February 13 – Friday the 13th – and I was in Ellicott City for the first of three special “Friday the 13th” ghost walk tours conducted by the Howard County Tourism Office this year. The others are scheduled for March 13 and November 13, 2009.

The ghostly accountant was just one of the many spirits we heard tell of during the two 90-minute walks taking us east and west along Main Street, the heart of Ellicott City’s historic area – where it seems that nearly every shop, restaurant, pub, and rooming house, not to mention the Visitor Information Center (above), is haunted: the spirit of a Confederate soldier re-enacts his death at the hands of Union soldiers, the deceased owner of a local garage sometimes joins the ghost tour group, among many others.

And along the way, we learned something of the history of this 200-year-old town, founded by the Ellicott brothers in 1771.

Location:
Ellicott City, Maryland, is located just east of Baltimore, off US-29 and south of I-70.

Walks leave from the Visitor Information Center at 8267 Main Street.

Each travels a different route through the historic district, and you may take one or both.

The regular season of ghost walk tours begins in April 2009 and runs Fridays and Saturdays to November.

Purchase tickets at the Visitor Information Center at 8267 Main Street, Ellicott City. The office entrance is around the corner on Hamilton Street.

Hampton Inn in nearby Columbia, MD, is only a few miles from the heart of Ellicott City, off MD-100. Among the amenities are a refrigerator, microwave, and full wi-fi access. A hot breakfast is included in the price of the room.

I love to travel – visiting new places and seeing new attractions. I especially love museums and guided walking tours. Come along with me, and I'll share with you some interesting places to go and fun things to do. Your comments are welcome!

Journals For Your Life ~ Blank, guided journals for your travels!

Journals For Your Life

Don't let your travel memories fade away ~ capture them in a blank, guided journal from ~Journals For Your Life!

These programs are affiliate advertising programs. We will receive a commission from Amazon if anyone clicks on any of the Amazon links or ads throughout this website and purchases any product from Amazon.

Thank you for supporting “Walk With History".

Cheryl Morris
I love to travel – and my favorite vacation activities are visiting museums and going on guided walking tours. And I'm a huge fan of classic film actor Peter Lorre!